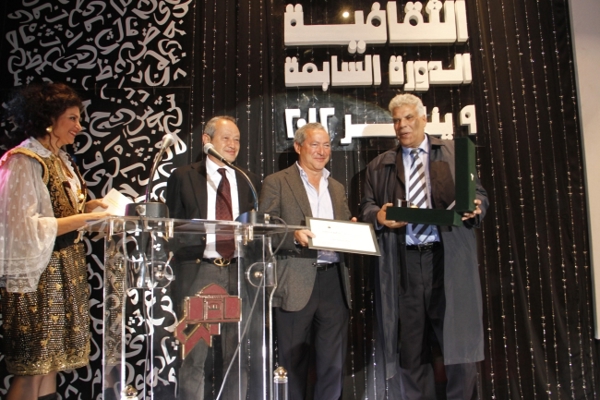 Under the slogan "A year since the Egyptian revolution and a century since the birth of Naguib Mahfouz," the Sawiris Foundation announced the winners of the 7th round of Sawiris Cultural Award Competition at a ceremony held on Monday, January 9, 2012 in the Egyptian Opera House and attended by a number of intellectuals and celebrities in Egypt.

Nine authors won this year in the different branches of the Award including the novel, short stories, screenplays and playwriting. Ali Abu Shadi, the head of the Screenplay Committee, said the committee decided to withhold the award for best screenplay for established writers because no scenario out of the forty-two works provided to the Committee met the judges’ standards.

The senior novel award went to Ibrahim Abdel Meguid for “In Every Week There Is a Friday,” while Ahmed al-Khamissi won in the senior short story category for his collection “Canary.” Each of the writers will receive a monetary prize of LE100,000.

In the emerging writers' category, “Amber Panet” by novelist Mohamed Rabie got the first prize, and Mohamed Salah al-Azab got second place for his novel “Sidi Barani.” Azab also won the best screenplay award for emerging screenwriters for his adaptation of Ibrahim Aslan’s “Two-Bedroom Apartment.”

The short story awards for emerging writers went to Tarek Imam for “The Story of a Man: Whenever He Dreams of a City, He Dies in It,” and Sherif Saleh for “Love Triangle.”

Imad Motawi’s “Insomniacs” took the first prize for playwriting. The second prize was shared by Peter Alexander for “But It Spins,” and Hamdi Ali for “The Eternal Trap.”

Engineers Naguib and Samih Sawiris distributed the prizes to the winners and honored the late writers Nabil Shalaby Salah Marei, and Ibrahim Aslan, in recognition of their role in the advancement of literary and artistic movement in Egypt.

Dr. Mohamed Abul-Ghar, member of the Award Board, said in his speech that “There is public concern about the future of art in Egypt, that grows only in an atmosphere of liberty and security. Concluding his speech, Dr. Abul Ghar emphasized his confidence that the "intellectuals of Egypt will stand as one hand, if Egyptian art suffered from narrow minds and will defend our culture for good."

This year's competition received 413 entries in the categories of novels, collections of short stories, screenplays and playwriting.