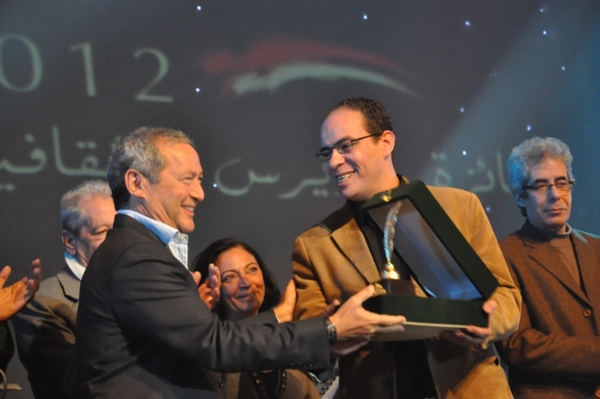 The Sawiris Foundation for Social Development announced winners of its Eighth Cultural Prize in a ceremony at the Cairo Opera House Saturday evening. The event was held in a simpler and less festive atmosphere due to the political unrest engulfing the country.

In the ceremony, the Award Board of Trustees affirmed that the award this year deserves more recognition than any year before, because it comes amid difficult conditions in Egypt, where creativity and freedom of expression are facing fierce attack from some radical figures in the society. They called everyone to lineup for defending the freedom of expression and creativity, the most influential in the minds of the Egyptian people.

Dr. Gannat El-Samalouty, the Foundation’s executive director, opened the 8th round of the Prize, confirming the foundation’s keenness on continuing its leading role in support of the cultural movement in Egypt, as part of its mission in serving the development issues in general, and in celebrating the excellent and creative literary works, “in a time where we need - more than ever - to mobilize the efforts of our civil society partners to defend the values ??of freedom, justice and enlightenment”.

Dr. El-Samalouty pointed out that this contest that began in 2005 for the novel and the short stories only, has evolved over years to include more literary and artistic tributaries such as screenplay and playwright. “Today, it has become the "destination of creative writers", who doubled their submissions from 267 in 2005, to 446 literary works, competing for this year's awards,” she said.

She further explained that Sawiris Foundation has adopted since its inception a "comprehensive vision" for the process of social development, based on supporting programs and projects for education, training and job creation with the aim of building the capacity of human beings and improving their chances in life. "The Foundation has turned its attention - at the same time – to the intellect and enlightened culture, the essential pillars in the process of social change, and expanded the scope of its concern for recognizing the outstanding writers, by establishing the Sawiris Cultural Award".

In his speech, critic Dr. Gaber Asfour, Award Board member, said that in light of the current political tyranny and religious intolerance, civil society must have a great role to lift society from such burdens, stressing that as long as there is creativity and creative youth, the nation will be alive and spark revolution that eliminates all obstacles hindering the achievement of social justice and human dignity.

The novelist Gamal El-Ghitani, the head of the judging panel of Established authors, said that the panel considered aesthetic values, authenticity and the spirit of creative adventure when judging the works. El-Ghitani has also called for adding “literary criticism” as a new branch of the award.

Samih Sawiris, the Award sponsor and SFSD board member, said he did not want to talk politics, so as to give a greater chance of culture and intellectuals to talk about art and creativity, yet, he stressed that politics and culture are inseparable, because politics is around us everywhere. Sawiris showed great welcome to add “literary criticism award” to the next year competition.

Salama Ahmed Salama, who passed away last year and was a co-founder of the prize, was awarded the Sawiris Cultural Personality Prize for his cultural efforts. His wife accepted the prize on his behalf.

The established author’s prizes went to Ibrahim Farghali for his novel Abnaa Al-Gablawy (Sons of Gebelawy) and to Ibrahim Dawood for his short story collection Al-Gaw Al-Amm (The General Atmosphere). Farghali and Dawood received LE100,000 each as a monetary award.

The judging panel for the Established Writers Awards included: Gamal El-Ghitani; critics Mona Tolba and Mohammed Badawy, and professors of Arabic Literature at the American University in Cairo, Samia Mehrez and Mohammed Bererry.

In the Emerging Authors category, for writers younger than 40, Yasser Ahmed received the first prize, LE40,000, for his novel “Reverse Course,” while “The Tango Dancer” by Mohamed Salem and “Visual Cadres” by Mohamed Mahmoud Ghitani split the second prize of LE30,000.

Mohammad Rafie won first place, with an award of LE40,000, in the short-story category for “The Splendor of Water.” In second place came Amira Hassan al-Desoki for her short story “Stop It, Youssef,” and Mohamed Farouk for “The Qasr al-Nil Cinema.” Winners of the first and second prizes in the Short Story Competition for Emerging Authors received LE40,000, and LE30,000 respectively.

Ibrahim Abdel-Maguied, head of the panel, said they chose the winning works on the merits of innovation in their literary style.

The Best Screenplay Award for Established Writers (LE100,000) went to “My State” by Khaled Ezzat, and in the emerging screenwriters category, it went to “The Capital of Hell” by Mohamed Amin Rady, who received LE80,000.

Cinema critic Samir Farid, head of the best scenario for established writers award panel, said the criteria on which they chose the best scenario was the ability to innovate and rebel outside the boxes of consumptive commercial cinema.

Playwright Ibrahim al-Husseini received the Established Playwrights Award for “The Potheads,” and “The Defeats of the Knights” by Selim Kitchener Istawrou came in second. They received LE100,000 and LE50,000, respectively.