How the Bab Amal "Door of Hope" program will reduce multidimensional poverty in Egypt?

In 2020, the World Bank estimated that between 88 to 115 million people would be pushed back into extreme poverty, defined as living under 1.90USD/day. Global extreme monetary poverty indicators are projected to regress to 2017 levels (9.2 percent) as a result of the effects of the Covid-19 pandemic, while extreme poverty was expected to drop to 7.9 percent in 2020 had the pandemic not taken place. That said, Egypt’s Central Agency for Public Mobilization and Statistics reported that the percentage of Egyptian people living in poverty (less than 1.3USD/day or less than 8,282 EGP annually) decreased from 32.5 percent in 2017/2018 to 29.7 percent in 2019/2020. While this figure is promising, there is still a lot more than can be done in order to achieve the first goal outlined by the Sustainable Development Goals and its first target of “eradicating extreme poverty for all people everywhere, currently measured as people living on less than $1.25 a day” by 2030.

The first step towards reducing poverty is to gain a deep understanding of the characteristics of people living in extreme poverty and the underlying root causes that may create barriers for them to sustain their basic needs. In this way, programs aiming to reduce poverty can be designed to appropriately address these root causes.

People who are living in extreme poverty have greater vulnerabilities and face structural constraints that prevent them from benefitting from overall economic growth and development. Sawiris Foundation for Social Development’s (SFSD) Social Empowerment team supported a needs assessment that consisted of a number of field visits, focus group discussions, and administered surveys in 2018 that outlined the challenges faced by many of extremely poor families living in Upper Egypt. Specifically, many of these households lack basic amenities, quality education and health care services, are socially excluded from their communities and do not participate in social activities. These households can barely meet their immediate needs, as they are consumed by how they will secure their next meal. Accordingly, they need more social and economic support to not only cover their basic needs, but anticipate future health and economic shocks that may affect them in the future. Understanding the constraints of families that are living in poverty and the challenges that they face in their daily lives was highlighted by Dr. Abhijit Banerjee, winner of the 2019 Nobel prize in economics (alongside Esther Duflo and Michael Kramer), during his lecture at the American University in Cairo (AUC) in 2017. He also shared that using rigorous evidence can help development practitioners and policymakers design policies and programs that can reduce poverty and address root causes.

Ending extreme poverty is at the heart of the Egyptian government’s efforts to build a sustainable future for all and its Ministry of Social Solidarity has devised several social protection schemes and economic programs to scaffold marginalized populations, through programs such as Takaful and Karama, Sakan Karim and Forsa.  Nevertheless, leaving people behind will remain a challenge if we do not rigorously test our programs and effectively target the people who are most vulnerable first.

In 2018, Sawiris Foundation launched the “Bab Amal” or “Door of Hope” program to target Egypt’s most vulnerable populations and scaffold them out of extreme poverty, aligning with the Foundation’s mandate of reducing multi-dimensional poverty by supporting evidence-based programs and inspired by emerging research that the program was improving household consumption, household assets and food security. It adopts BRAC’s Ultra-Poor Graduation Initiative approach to build sustainable livelihoods and resilience among the people who are living in extreme poverty. The Bab Amal program is being evaluated by the Abdul Latif Jameel Poverty Action Lab Middle East and North Africa based at the American University in Cairo. Through supporting this randomized evaluation, the Foundation hopes to answer critical questions that will help policymakers and development practitioners better understand what are the most effective ways to reduce poverty in Egypt.

The Graduation approach used by the Bab Amal program has been tested and implemented in many countries over the last two decades. Through continuous learning from evaluations conducted over the years, BRAC has developed a program that consists of a set of sequenced and interrelated interventions that are designed to build an economic ladder that supports the targeted households out of extreme poverty. In this light, the Bab Amal program’s mission is to give targeted households a big push out of the poverty trap through providing an array of dedicated and integrated solutions that address the specific needs and challenges of the poorest. These socioeconomic interventions include 1) a productive asset transfer, 2) a consumption stipend, 3) access to healthcare, 4) financial inclusion services, 5) social empowerment skills training, 6) training on livelihoods, and 7) hands-on coaching. Through these interventions, households can build sustainable livelihoods, resilience, confidence and ‘graduate’ out of extreme poverty. 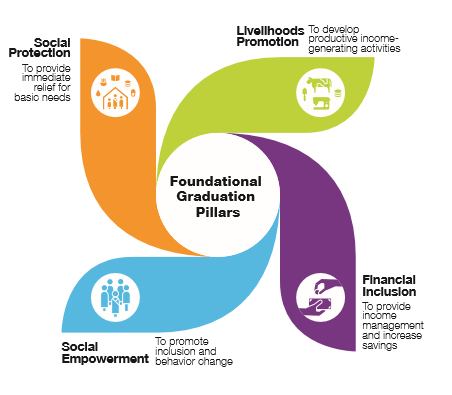 The Bab Amal program currently targets 2,460 households (more than 12,000 individuals), ninety percent of whom are run by females. These households are located in 35 villages in the two poorest governorates in Upper Egypt, namely Assiut and Sohag. In 2019, Assiut and Sohag had estimated poverty rates of 66.7 percent and 59.6 percent respectively.

At SFSD, we are continually committed to disclosing lessons learned from this experience with the Egyptian and global development community to think together on what are the best ways to support households out of poverty. We expect to share initial results from the evaluation of the Bab Amal program in the coming year and our staff will be sharing stories from the field and from program implementation in our blog soon.

Nahed is the head of the Social Empowerment Sector in Sawiris Foundation. She has more than twenty years of experience in development, working with more than 400 NGOs across Egypt in various sectors such as job creation, socio-economic programs, and poverty alleviation programs. Before joining SFSD, she worked with a number of international entities including JICA, GIZ and, CIDA. Nahed holds a diploma in non-governmental organization management from the faculty of economics and political science at Cairo University, and received master’s degree in business administration from the Arab Academy for Science, Technology and Maritime Transport.